Judy Cassab – Portrait of an artist has been selected as a finalist in the 2015 Archibald Prize and for the 2016 Black Swan Prize for Portraiture.

About the work:
Judy Cassab AO CBE was Filippa Buttitta’s sitter for her 2015 Archibald entry.
The portrait took around 20 sittings and Buttitta has produced the painting largely from life, working in front of the 94 year old artist at the nursing home where she lived.

Buttitta has found the regular visits and companionship of the renowned artist extremely rewarding and motivating. She was delighted when Cassab actually touched the work with her own bush and even more delighted to see Cassab undertake a few small works of her own, after not having painted for 2 years.

Buttitta carried in the developing work in her ute from her Lewisham studio to Cassab’s Randwick nursing home between once to twice per week. Spending time with the elderly artist and painting her portrait from life seemed as important for the sitter as it was for the artist. For Buttitta, it was the chance to explore and understand the passion and mind of a great Australian artist. For Cassab it seemed to re-ignite an inner passion to paint as she fussed over Buttitta’s work and undertook a few small works of her own in what seemed a truly remarkable exchange.

This is not the first time Buttitta has visited nursing homes and other hospitals in the name of art. Last year she helped a fellow artist dying of cancer finish his final paintings right up to week before his death. As a child Buttitta drew portraits of elderly people in the nursing homes where her mother worked. Today, she regularly visits children and teenagers at RPA Hospital delivering lessons on art and doing live, on the spot drawn portraits of them.

Cassab’s first portrait was of her grandmother when Cassab was 12 years old. The skill demonstrated in the portrait was like it had been drawn by an adult. The love for creating art from a young age right  throughout her life and being the first woman to win the Archibald Prize twice is really something Buttitta admires and aspires to.
While painting Cassab’s portrait, Buttitta read her diaries and discovered that she had a lot in common with the elderly artist. Buttitta has said “she has become a dear friend to me, my favourite artist and someone to really follow. I feel so honoured to be able to paint such an outstanding role model.”

On Sunday afternoon, June 21st, 2015 many of Cassab’s family, friends and fellow artists celebrated her portrait and a collection of her private works at Buttitta’s Twiverton Gallery. Her son Peter Kampfner gave a wonderful speech about her life.

Since delivering the portrait to the AGNSW Buttitta continued her visits to see Judy regularly and continued live portrait drawings of her. During this time, she also particularly discovered that Judy had not seen her long time artist friend Charles Blackman MBE for around 3 years.The two used to spend many hours drawing and painting together twice a month for many years until the aliments of old age separated them and their creative sessions stopped. As a result, Buttitta felt that the right thing to do was to get the two together and organised for the two to meet again. The reunion turned out to be a remarkable experience and as a result Buttitta felt there was an important story to tell to the nation about the two artists. As an extension to Judy’s previous portrait, Buttitta set out to paint another painting. This time it would explore the remarkable artistic lives and friendship between these two great Australian artists.

The painting entitled: ‘ The Last Reunion’ is a double portrait of Judy and Charles. It portrays Charles visiting Judy in the nursing home where she lived. Buttitta’s joy in experiencing the two great Australian artists seeing each other was a huge delight. The two smiled and laughed together. Buttitta recalls Charles commenting “I’m just paying my respects” as Judy smiled endlessly while holding Charles’s hand during the visit.

The theme of being reunited with a friend one has missed and not seen for several years became a fascinating extension to learning about Judy’s creative life and the creation of her portrait last year. The touching and emotional theme of friendship, of longing and then being at a last reunited often not only reflects the realities of the elderly but also our own lives. It thus, became the core inspiration behind the double portrait of two great artists and close friends for the 2016 Archibald Prize.

This reunion sadly turned out to be the last as Judy passed away 3 months after on November 4th, 2015 aged 95. 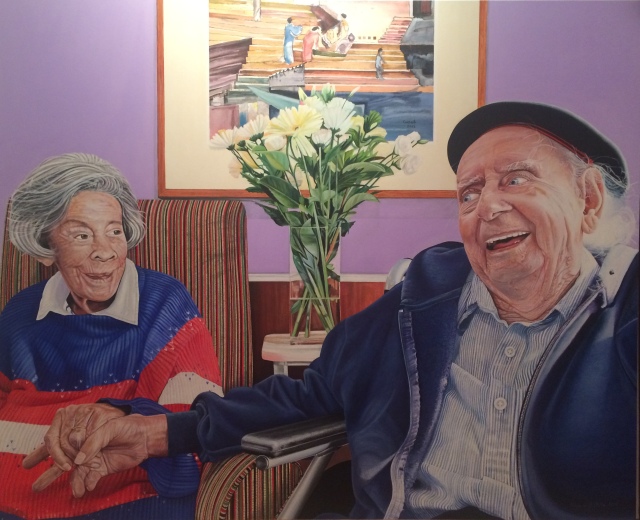